10 Years Since the Financial Crisis: Northern Rock – What Happened to the Customers?

10 years after the Northern Rock bail-out, thousands of customers remain trapped into paying high mortgage rates. Over the past 10 years these borrowers have paid thousands of pounds more for their mortgages than those at other major lenders. Some have now been sold on to hedge funds and private equity funds or seen their mortgage sold back onto the global financial markets. These borrowers continue to pay over the odds for their mortgage and are not being offered the ability to access fixed rates and gain certainty over their monthly payments. BBC Panorama covered this issue in its 22nd October 2018 programme, “Trapped by my Mortgage”.

Lord Sharkey, Co-Founder of New City Agenda said: “UK Asset Resolution were naive to think that selling these customers on to Cerberus would result in them being treated better and able to access new deals and fixed rates. UK Asset Resolution needs to apply proper safeguards to all future mortgage sales to ensure that customers receive a fair deal.”

“The Government needs to expand the scope of FCA regulation so that businesses like Cerberus and other private equity funds buying up portfolios of mortgages are fully in scope of regulation and supervision by the FCA. The FCA should change the rules to enable more mortgage prisoners to switch and force all banks and other firms to give their trapped mortgage customers a fair deal and access good value fixed rates so that they can gain some certainty over their mortgage payments.”

Executives were bailed-out, customers were sold on

We know that the Northern Rock executives were bailed-out, left with gold-plated pensions and largely escaped the consequences of their incompetence. Executives like CEO Adam Applegarth got to keep virtually all of their bonuses and some received more whilst they were cleaning up their own mess. They also escaped accountability: more executives were sanctioned following the failure of Barings bank in 1995 than at Northern Rock, HBOS and RBS combined.

What happened to the Northern Rock mortgage customers?

But what happened to the customers? Like those consumers who took out Northern Rock’s famous “Together” mortgage prior to the financial crisis. This offered them a mortgage loan of up to 95% of the price of their home, combined with an unsecured loan, which meant that the total amount borrowed could be 125% of the value of the house. In 2005 and 2006 the ‘Together’ mortgage loans accounted for almost one third of Northern Rock’s new lending.

So let’s look at how a customer fared: A couple, let’s call them Mr and Mrs B, took out a mortgage in 2005 on a two-year fixed rate and finished their initial deal period as Northern Rock was beginning to flounder in August 2007 with £200,000 still outstanding on their mortgage. They would then move onto Northern Rock’s Standard Variable Rate and remain there, unable to remortgage because of a change in their circumstances and a change in market appetite for risk.

Customers who remained with Northern Rock after its nationalisation will be mainly “mortgage prisoners” – customers who are trapped and unable to switch lender. Mortgage prisoners could have been those with debt problems, hit by unemployment or a fall in wages, self-employed people who had taken out self-certification mortgages or those suffering from falling house prices.

This couple’s mortgage are left with Northern Rock Asset Management / UK Asset Resolution when the “good” piece of Northern Rock is sold to Virgin Money. They continued to pay the higher SVR of 4.79%. But, in 2015, they are notified that their mortgage is being sold to US investment fund Cerberus – part of a record breaking sale of £13 billion of mortgage assets.

In January 2016, Lord McFall wrote to the Treasury, UK Asset Resolution and the FCA raising concerns about the safeguards which would be put in place when the mortgages were sold to Cerberus. He said that it was important that customers affected by these sales were offered a fair deal, protected from changes to the terms and conditions of their mortgage and offered an opportunity to gain certainty over their mortgage payments by accessing a fixed rate.

UKAR replied to say that with regard to the £13 bn deal returning these mortgages to the private sector “the option to be offered new deals, extra lending and fixed rates should become available to them“. This turned out not to be the case for the mortgages sold to Cerberus.

When it sold their mortgage to Cerberus in 2015, UK Asset Resolution said that the sale would “not affect the terms and conditions of the mortgages”. This might have led some to believe that they would benefit from any cuts to the Bank of England base rate.

After the EU referendum the Bank of England did indeed cut interest rates by 0.25% – Governor Mark Carney said that banks had “no excuse” not to pass on the benefits of lower rates to borrowers.

Unfortunately for Mr and Mrs B, Cerberus delayed cutting its rate by 2 months and then decided to only pass on 0.15% of the cut, leaving the couple paying a rate of 4.64%.

It has been a lottery as to whether Northern Rock customers were sold to a mortgage lender which was interested in offering them a new deal or an unregulated entity that was only interested in repackaging their loan and selling it on whilst creaming off as much as possible.

The “protection” offered by the FCA allows their new hedge fund owner to avoid passing on the full benefits of the base rate cut and to continue to keep thousands of trapped borrowers on a high Standard Variable Rate. Even though rates now look like they might be going up, the FCA does not require Cerberus to offer the couple and other trapped customers the chance to move onto a fixed-rate deal and enjoy certainty over their mortgage payments.

Borrowers thousands of pounds worse off

10 years after the credit crunch due to the fact they have been paying a higher Standard Variable Rate than at other major UK lenders, the couple are already more than £15,000 worse off. Compared to someone who had taken out a CAT standard mortgage with Nationwide which was guaranteed never to be more than 2% above base rate they are more than £34,000 worse off.

Mr and Mrs B continue to pay over the odds for their mortgage – they haven’t had much of a bail-out. The regulatory framework continues to allow unregulated entities like Cerberus to purchase the mortgage loans of trapped customers. The FCA is pursuing a voluntary approach which probably won’t help customers at Cerberus or help them access fixed rates.

Worse, we still have a mortgage market based on offering short-term deals to consumers and then placing them on long-term Standard Variable Rates. If you can switch again at the end of the short-term deal you are fine – but what if you can’t? At least our couple saw a fall in their mortgage payments when the Bank of England cut interest rates in 2007/2008. Customers coming to the end of fixed rate deals two-years from now will see their payments jump significantly. There is absolutely nothing in the future preventing trapped customers from being exploited with higher rates.

The only light at end of the tunnel for Mr and Mrs B is that they will have paid off their mortgage by 2025 – just a couple of years after Mr Applegarth, the former Northern Rock CEO, begins to be entitled to his £300,000 a year pension.

Chart: Mortgage Standard Variable Rate paid by Northern Rock customers who were sold to Cerberus in 2015 compared to two other major lenders 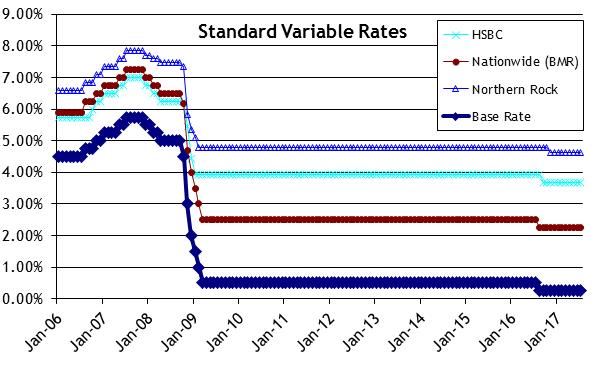