Changes to bank taxation in the Budget increase the burden on challenger banks and fail to take into account the recommendations of the Parliamentary Commission on Banking Standards to reduce the bias in the tax system which encourages debt and leverage.

The Bank Levy was introduced on 1 January 2011 and was “intended to encourage banks to move to less risky funding profiles”. The Levy is charged on the amount of a bank’s liabilities which exceed £20 billion. As it was intended to target higher risk sources of funding the Levy is not charged on amounts of tier 1 capital and insured deposits which are covered by the FSCS. For UK banks the Levy was applied to the global balance sheet as this was seen as representing the best measure of financial risk to the UK system and the wider economy.

Whilst it was originally projected to raise £2.5 billion in annual revenue, initially the amount of money raised was below the Treasury’s forecasts – just £1.6 billion in 2011/12 and 2012/13. Banks shrunk their balance sheets at a faster than expected rates and moved away from sources of funding which attracted the higher charges under the Levy. Partly encouraged by the Levy, but also due to regulatory pressure, banks raised more capital and retail deposits, held higher quality liquid assets and moved towards longer-term sources of funding.

Frequent changes to the Bank Levy

Multiple changes were made to the Levy, with the rate being increased nine times in the last parliament. Some of these were used to offset the benefits to the banks of reductions in the headline rate of corporation tax. Others were used to ensure that the revenue raised from the Levy met the original projection of £2.5 billion a year.

In the 2015 Summer Budget, the Chancellor announced that the Levy would be gradually reduced – reaching 0.10% by 2021. From 2021, banks will also only be taxed on their liabilities in the UK. To raise additional revenue from banks a supplementary corporation tax charge of 8% on bank profits will be introduced.

Winners and losers from the Summer Budget changes to bank taxation

The winners will be large, international banks and those who have a greater reliance on wholesale funding – including banks with large investment banking arms. Losers will be UK-based banks with higher levels of equity and those which rely on funding from retail deposits. In particular, the corporation tax charges will hit many of the new challenger banks which, because of their size, were exempt from the Bank Levy.

Bias in the tax system encouraging banks to increase leverage

The Parliamentary Commission on Banking Standards identified that there was a bias in the tax system encouraging banks to increase leverage and use debt rather than equity. Andy Haldane of the Bank of England told the Commission that:

One of the reasons why we have not just capital regulation but very complex capital regulation is that we are trying to induce banks to do something that the tax system at present provides a disincentive to do, which is to raise extra equity. So my hope would be that if the differential treatment were to be removed, banks themselves would have fewer disincentives and perhaps even some incentives to hold sufficient equity and that would lessen the burden on this complex regulation.

The Commission concluded that “Tax rules are misaligned with regulatory objectives in that they reward banks for financing their activities through issuing debt rather than equity and so increase leverage, and create a disincentive for banks to hold capital in the most loss absorbent form.” It recommended that the Government consult on introducing an Allowance for Corporate Equity (ACE). This would allow banks to deduct an allowance related to their amount of equity from their corporation tax bills. To ensure that this was revenue neutral the Commission recommended that this be offset by an increase in the Bank Levy.

Experience with the Bank Levy shows the difficulties of a tax which was introduced both to change behaviour and was constantly tweaked to raise a set amount of revenue. The Budget changes shift the burden of taxation away from larger, systemically important international banks and towards smaller challenger banks and those funded through retail deposits. With no sign of a consultation on introducing an ACE, the tax system is becoming less aligned with the aim of a safer and lower leveraged banking system. 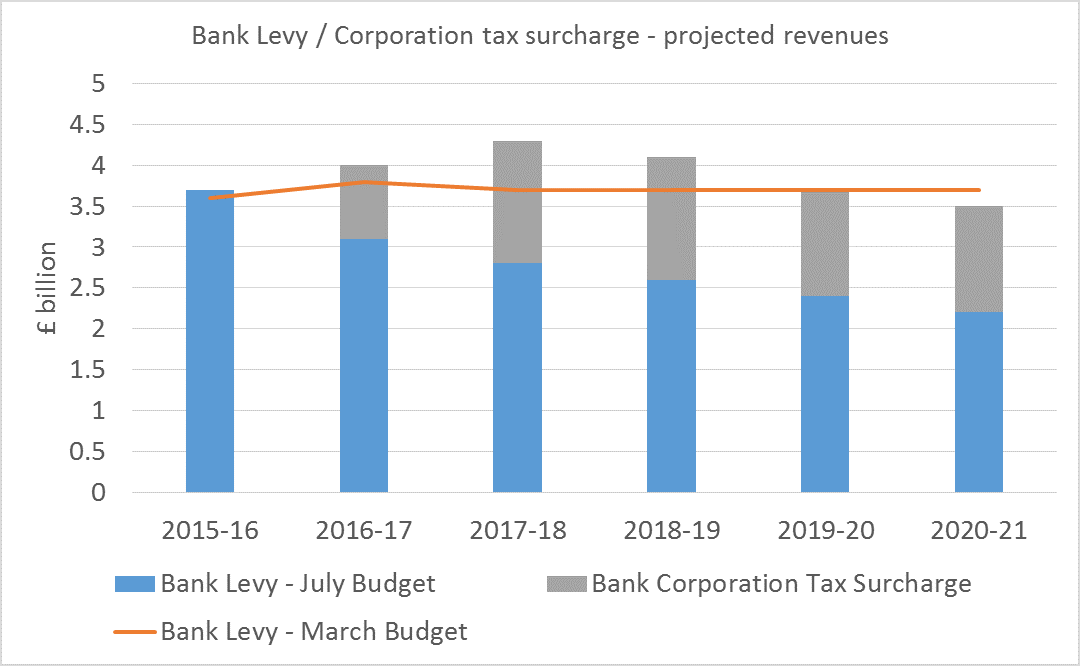