With response from a panel including:

Is a crisis looming for central banks and how should central bankers and politicians respond? Nearly ten years on from the crash, we’re stuck in an unprecedented period for monetary policy. Despite hints at tighter policy, interest rates remain at record lows and central banks are still buying up billions of pounds in assets. Under normal circumstances, monetary policymakers would have the option of cutting rates to respond to future shocks. With the Brexit negotiations, hung parliament, geopolitical instability and fears about the mountain of household debt, central bankers face an uncertain future. But with rates close to zero, there’s growing concern that they are ill-equipped to face what lies ahead.

Meanwhile, politicians are speaking out about monetary policy’s side-effects. In an unprecedented intervention last year, the Prime Minister warned that the Bank of England’s policies have widened wealth inequality, and benefited home-owners at the expense of those not yet on the property ladder. Similar criticisms have been leveled by lawmakers in the USA, Eurozone and Japan. Is the political settlement underpinning monetary policy falling apart?

Adair Turner is Chairman of the Institute for New Economic Thinking, where he was a Senior Fellow from 2013-15. Formerly chairman of the Financial Services Authority, Lord Turner played a leading role in redesigning global financial regulation following the 2008 crash. His book Between Debt and the Devil – Money, Credit and Fixing Global Finance sets the record straight about what really caused the crisis and makes the case for equipping central banks with new monetary policy tools.

Fran Boait is Director of Positive Money, a research and campaigning organisation championing reform of the money and banking system. Fran studied Natural Sciences at the University of Cambridge. She went on to complete a PhD in climate change mitigating technology during which she became interested in money and banking after the 2008 financial crisis. Fran has worked at various international organisations including the United Nations, Greenpeace and BP.

Anthony Hilton is a highly-respected business author, broadcaster and journalist. He is currently the Senior Commentator of the Evening Standard and Independent. He was previously Managing Director of the Standard and City Editor of The Times. He has worked for the Observer, the Daily Mail and the Sunday Express and has also served in New York where, for three years, he was Business Correspondent for the Sunday Times. 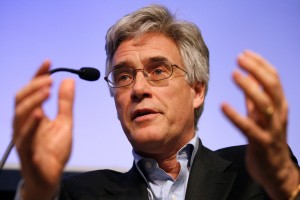