Lord McFall: Proposals for free cash machine network are a leap in the dark

Lord McFall has responded to a consultation from LINK on how banks fund the network of free-to-use cash machines.​

Lord McFall said “LINK are taking a leap in the dark with these proposals for funding the network of free-to-use ATMs. They have no idea how many free-to-use ATMs will shut down as a result or what the impact might be on vulnerable consumers or SMEs who depend on access to cash to make and receive payments”

“The public has a right to know where each of the major banks stands on these proposals and whether they are reneging on their commitment to support a widespread network of free-to-use ATMs. Keeping their responses secret will do nothing for the trust of the public which they are committed to re-establishing. It is unacceptable that this consultation is dominated by the views of the major banks and excludes the public and consumer groups which are not members of the LINK Consumer Council.”

Lord McFall’s response to the consultation opposes the changes to reduce the interchange fee for the following reasons:

LINK is consulting its Members and the LINK Consumer Council on proposals to reduce the level of interchange – the fee paid by card issuers (banks and building societies) to ATM operators.

Lord McFall has responded to the LINK consultation and also sent a copy of his response to the Chair of the Treasury Select Committee and the Chief Executives of the FCA and PSR for their comment.

Lord McFall was Chair of the Treasury Select Committee when it conducted the inquiry into Cash Machine Charges in 2005. This inquiry found hundreds of local areas where consumers were being hit with high charges for withdrawing their own money. In Speke, a low-income area in Liverpool consumers faced charges of £1.50 for making cash withdrawals.

Following this inquiry, in 2006 he Chaired an ATM Working Group involving consumer groups, the banks, independent ATM operators and the Post Office. The Working Group’s report recommended the introduction of a ‘financial inclusion premium’ to provide a long-term and enduring incentive for ATM operators to expand the availability of free cash machines in low-income areas that lacked them and also to help protect free machines where they were the only such ATM in these areas. These proposals were implemented by LINK as a ‘financial inclusion programme’.

The Working Group members, including all of the major banks and building societies, also unanimously committed themselves to the long-term future for a large network of free cash machines in the UK, and recognised the public policy priorities attaching to continued widespread availability of free ATMs.

A copy of the Working Group’s report was submitted to Ed Balls and is available here. 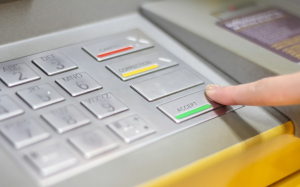