In March 2007, Powys County Council had £14.5 million invested in Goldman Sachs’ Global Tactical Asset Allocation fund. They were attracted by the name and steady returns they were promised. But something went wrong. In August 2007 the fund lost 30% of its value in a week. By the time Powys Council came to review Goldman’s performance in 2008, the fund had fallen by 45%. The Council eventually sold the fund in 2009 after around £9 million in losses – costing each household in Powys more than £150. Staffordshire and Kent County Councils had also invested and between them lost around £120 million of their council taxpayers’ money.

How can hedge funds, which are supposed to be market neutral and profitable for years, suddenly suffer such big losses in one week? What was it about the market that those managing money at Goldman Sachs, Powys Council and Kent Council failed to understand?

Professor Andrew Lo discussed these issues from his book “Adaptive Markets” at a speech he gave to New City Agenda. He highlighted that advances in technology and complexity have created a combination of Moore’s law and Murphy’s law. This means that in financial markets, whatever can go wrong will go wrong, faster and bigger than before.

Professor Lo explained the Adaptive Markets hypothesis as “The idea is that financial interactions are governed not by the law of physics, but adaptation, selection and ultimately evolution. We are trying to maximise our benefits but we are not perfect and we make mistakes. Ultimately, it is how we respond to those mistakes and how we learn and adapt from those mistakes that determine market dynamics.”

Hedge fund managers had adapted to the environment up to 2007 by using computer models and rising amounts of leverage to search for returns. This worked for a while, but when one fund started selling in August 2007, it created losses for others which were outside the bounds of their models and caused them to sell. Hedge funds had adapted to the markets in new ways which created new risks which those managing money for Goldman Sachs, Powys Council and Kent Council failed to understand.

A similar evolutionary process has resulted in banks becoming too-big-to-fail. Professor Lo highlighted that in many biological environments, size matters, and the size animals grow to is determined by their environment and the processes of evolution and natural selection. Banks are no different. The environment in which they continue to operate favours size. Banks succeed not by being more efficient or by treating customers better, but by being big and complex and getting access to taxpayer support and bail-outs – a form of unnatural selection. Why have taxpayers allowed this to happen? Well, because politicians, regulators and auditors have also adapted to the environment and all promised that they are now much more competent and have “ended” too-big-to-fail.

On culture, in the banking sector some cultural values were positively correlated to individual success for bankers. Cultural values such as short-termism, risky behaviour and exploiting customers spread within banks and are taught to newcomers. Aggressive toxic cultures spread like a virus throughout the banks. As Professor Lo says “if we wish to change culture, we must first understand the forces that shape it over time and across circumstances”.

He has advocated the introduction of a Capital Markets Safety Board which would investigate what went wrong in a non-partisan way. When it comes to accountants and auditors, I have no idea why they missed the risk-taking at HBOS or sanctioned the misleading Repo 105 which Lehman Brothers used to disguise its risk. At the moment we understand nothing about the behavioural or cultural motivations of the individuals involved.

The book by Professor Lo is a fascinating introduction to a hypothesis which has implications for those working in the financial services sector and those overseeing it as auditors and regulators. As for the councils, they never learn and Powys still have over £25 million invested in Goldman Sachs hedge funds. Kent council doesn’t seem to learn either and have suffered losses from investing in Neil Woodford’s income fund.

To sign up to New City Agenda’s email list or to receive a copy of the transcript from the event with Professor Andrew Lo, please email dominic.lindley@newcityagenda.co.uk 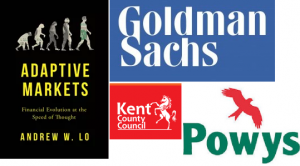